For sale is my recently completed restoration of a 1917 Ford Model T Touring car. This 98 year old antique vehicle was partially restored when I purchased it a few months ago.  The prior owner of the vehicle passed away prior to completion, but had replaced all tires and wooden spokes, and rebuilt the engine with fresh babbitt bearings and had installed a larger Model A crankshaft, Model A piston rods and specialty aluminum .040 oversize pistons with four rings.
This work was accomplished perhaps in the early 2000’s, and then was placed in storage until I purchased it two months ago.  The ‘fresh’ tires now have some minor age cracks, but have virtually zero wear on the treads.  The car had the original top irons included with the sale, but no top or interior upholstery was done.  I installed a new top, new upholstery and new seat springs, new floor mats, and rebuilt era correct coil box, coils and Tiger timer, along with new wiring throughout.
The engine was also never ran up after having been rebuilt, and I disassembled the motor and found that the magneto magnets and coil ring had been removed.  I replaced these components with the correct components which I recharged and reconditioned , and the magneto now produces approximately 11 volts AC at an idle, and around 25 volts AC under normal running RPMs: a very powerful ignition system currently.  It also has a 6 volt battery with generator and electric starter (neither of these components were OEM to the 1917 model year, but are extremely useful when used for touring and daily driving).  I also replaced the piston rings with new specialty rings from Egge Pistons in California, and had honed the cylinders prior to installation. A high compression head has also been added by me to accommodate the increased power from the larger Model A crank and longer compression stroke. The cam has been ground to increase the duration of valve opening, and much larger main bearing caps and bolts/nuts have been installed. A rebuilt Holley NH carburetor has been installed and provides adequate fuel for this 191 cubic inch engine (original block displacement is 177 cubic inches).  All of this engine work and machine work is not visible, and accordingly the only visible alterations to this engine are the addition of the generator and cutout as well as the electric starter, the 1/2″ lower cylinder head, and larger main bearing nuts.
Only an experienced Model T expert will be able to detect any modifications, and to most all others, this car looks to be original.  In other words, it does not appear to be ‘hot rodded’, but it indeed has more power than the original 20 horsepower engine.  My estimate of the current power would be approximately 32 horse power.  To cool engine with this increase in HP, a newly manufactured radiator has been added, and no overheating problems exist currently.
This increase in power allows the car to travel at much greater speeds, but the 1917 Touring platform/suspension does not support any speeds beyond 45 miles an hour with stability.  Extreme caution should be exercised in traveling at these higher speeds, and this ‘stroker’ engine is primarily designed to allow the operator to navigate hills without losing as much speed and/or down shifting into low gear.  It also allows much faster time to achieve cruising speed when shifting from low to high gear.  The torque of this more powerful engine is adequate to power through moderate hills with no stress to the engine, and no threat of breaking the much stronger Model A crankshaft, as was a possibility of the weaker original crankshaft.
IMPORTANT NOTE: 1917 authentic Illinois license plates, luggage rack and antique suitcase, bulb horn shown in photos are not included with the car, seller will remove them upon sale to ultimate purchaser prior to shipment. 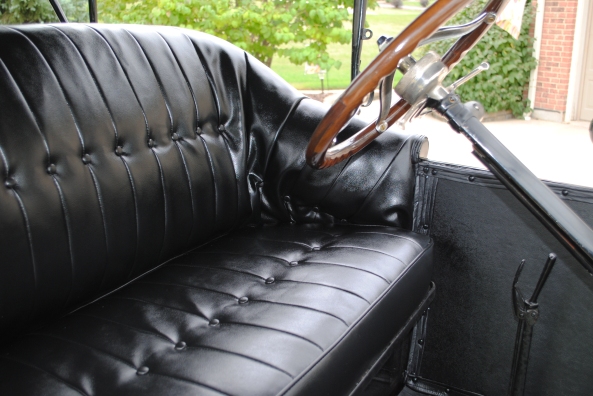 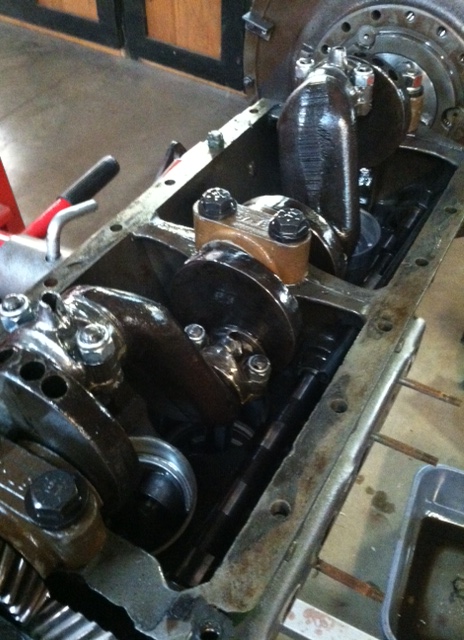