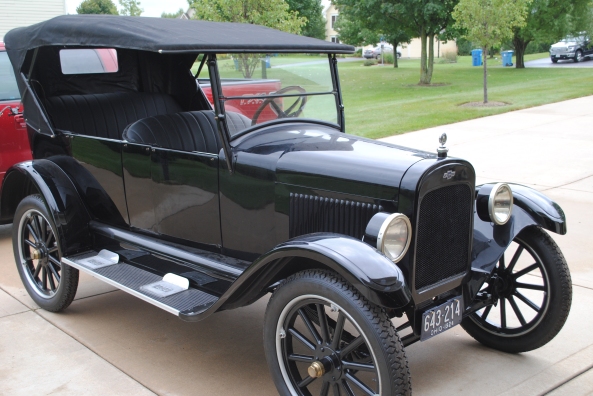 I sold this car to a Florida client in mid September, 2016.  I have gotten this 1924 Chevrolet Superior running and took it for a test drive of around 12 miles, and it performed admirably, other than the ancient transmission is very tricky to shift.  I started getting the hang of it towards the end of my test run, and with some stick time I think I would had it down pat.  Up to this point, I had gotten the aesthetics done a few weeks ago and ran it around the block, perhaps half a mile, to see what happened: all the 4 gears worked (reverse and three forward), the brakes were OK and all of the electrics worked, with the exception of the horn button at the top of the steering column – I could not figure out how to extend the wire through the steering column.  Nobody within the Chevrolet antique club had any clue, as none of them had this model, so I simply added a horn button at the bottom of the dash.  The future owner can figure this out, not a deal killer in all likelihood, as the horn works, but just not as originally configured by Chevrolet in 1924.  Additionally, the speedometer does not work, but all of the components are intact and present. Likely the link cable is badly worn, these link components are hard to find, but are out there; it just takes time to track them down.

A few weeks ago, I ran this car on the road for the first time in perhaps 30 years, the engine overheated quickly and it ran poorly, even though I had re-built the engine and carburetor a few weeks before.  I determined that the original radiator needed to be rebuilt along with a poorly re-sealed gas tank which turned the gasoline a red color, and the sample I drew into a clear jar looked like strawberry Gatorade. Both radiator and gas tank were re-done by professional shops (not cheap), and I am confident the way it runs now that these issues are behind me. 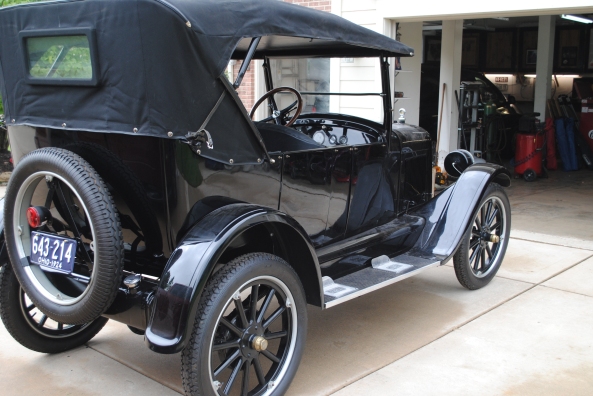 This car to the casual observer looks much like a Ford Model T (any color you want, as long as it’s black, as ol’ Hank Ford quipped), with the obvious exception of the blue Chevrolet ‘bow tie’ radiator badge.  Unlike the Ford Model T, however, the Chevrolet was built much stronger than the Model T, and could survive a moderately severe crash intact, whereas a Model T would have been completely demolished in a similar impact.  This car is about 18” longer wheel base, larger front and back seat area, and weighs about 500 more pounds than a Model T; all in all a larger, sturdier car, in addition to a faster car, with three forward speeds rather than the Model T’s high and low forward gears only.

Not many Chevrolets have survived from this era, as Chevrolet made much of the interior structure of wood, (of which was all replaced in this car by grampa in the early 1990’s), as most Chevrolets rotted away and were crushed and used for scrap metal in the metal drives of World War II.